A few awesome words come to mind when I think of Jenn Appel. She’s been one of my biggest supporters from the beginning of my career as an author, and I decided it was time to get to know her a little better. (I added patient because I promised her this interview, wrote the post, and then scheduled it for July OF NEXT YEAR by accident LOL. She’s not complained at all.)

When Jenn first started commenting on posts on my author page, I didn’t realize she wrote books herself. She’s never once been opportunistic. Instead, she’s always offered her wholehearted support without expectation of anything in return. These days, that’s an awesome trait!

Jenn grew up in Fairbanks, Alaska. She lived with her parents, who both worked in a Christian school, but then moved to Georgia when she was thirteen, which devastated her. She says she thought she was saved when she was a small child, but actually became a Christian at age sixteen. She attended Pensacola Christian College for 2 1/2 years. Now, she’s using her talent to write faith-based stories. You can find out more on her Facebook Author Page: https://www.facebook.com/JenniferAppelAuthor/

So, Jenn, what made you decide to write?

I began writing when I was 13 right after we moved. It may have been because I didn’t know anyone where we were, but I felt a need to write. It took me 3 years to finish my first book. I don’t ever remember deciding to write. I just knew I had to write.

How many books have you written, and how many are published?

I have written nine currently with four being published on Amazon. My fifth one – Secret Truths – should be available in August if I can get my cover the way I want it and finish editing in time.

Tell me about your favorite literary character.

Oh, that’s easy, but it’s two from the same book. Delancey and Makenzie Bishop from Lori Wick’s Pretense. That’s a book I read about once or twice a year. Second favorite would probably be Jonas from The Giver. I’m an eclectic reader.

I love the Giver! Awesome. Okay, next question. Who inspires you most as a writer?

Hmm, that’s a much tougher one. Lately my two favorite writers have been Dayo Benson and you. And I really don’t say that as a suck up. I really enjoy your style of writing so much. I feel like you’re where I want to be heading and that’s inspiring. Growing up, Lori Wick for sure.

Very sweet of you! Okay, next question. Tell me about your books.

I love writing books set in Alaska because I’ve spent so much of my life here. My first series begins with Flight of Her Life. It’s about a female pilot named Piper who flies people on adventures in the Brooks range. She has issues with God based on the fact that her father died and her fiance joined the military unexpectedly on her. We pick up several years after those events and she and her ex-fiance are working to be friends again. They work closely together so are thrown together often. Spoiler alert – she ends up in a plane crash that tests her faith and her relationships.

The series continues with us meeting other characters who are also in Piper’s world. In book 2, Rebecca Gentry moves to Silverwood, Alaska to be a nanny of sorts and finds so much more there. Book 3 is Anna McDaniels, a married woman whose marriage is much less than “happily ever after.”

Captive Freedom is the first of my Life at Sea series and explores modern day slavery from a different perspective. It takes place mostly in Alaska and part of it on a cruise ship. And yes, I want to go on a cruise someday, but I had to do my research for this one the unfun way.

My newest book, Secret Truths, is my first one not set in Alaska. Best friends, Reagan and Kennedy find estrangement when Kennedy finds Christ at age fifteen. They are working on their relationship when a huge secret comes to life threatening everything they have ever known. This book skips back and forth in time which was fun to write, but also hard to keep track of so many story timelines.

What are your writing goals for the future?

I want to continue writing and get the word out for my books, not for fame or fortune, but in hopes that the Gospel will be seen by more people. I’m not very good at face to face witnessing to strangers, but I enjoy weaving Christ into every story I write and I hope that someone may come to know Jesus through my writing.

Pantser, for sure. I did plan for Captive Freedom (and so much research) but that’s the only one I’ve planned on. As an aside, it’s my favorite so maybe that should tell me something.

Do you have an overall theme or message you’d like to get out to readers?

Awesome! Well, it’s been a pleasure–not only this interview, but all your continued support and encouragement. I’m glad to know you!

I’m glad to know you, as well! Thank you for this honor!

Here’s the link to Jenn’s Captive Freedom, just $1.50 on Kindle. Just look at that skyline! Show her some love! Download a copy and give her a review! https://www.amazon.com/Captive-Freedom-Life-Sea-Book-ebook/dp/B01MZJ0KFR

Ivy Bishop isn’t thrilled for her upcoming Alaskan cruise or her father’s new marriage.Bored with life and wanting to be out on her own, she has a penchant for running away. Meeting new friends on board the cruise, Ivy gets a new glimpse of how life can be surrendered to God, but she isn’t ready to give up the anger that has become her life. But when the unexpected happens and Ivy is faced with her eternity, she has to make decisions that will change the rest of her life. Captive Freedom is a book of adventure, forgiveness, and second chances. 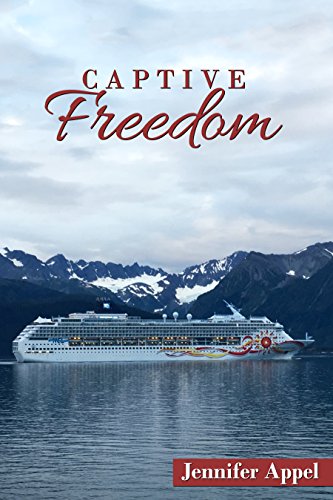 Posted on July 26, 2017, in Uncategorized. Bookmark the permalink. Leave a comment.