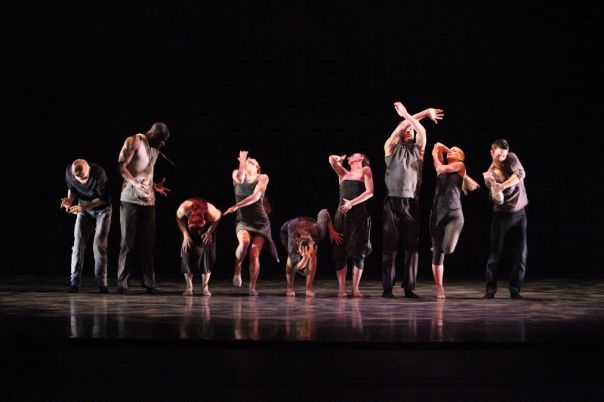 Giordano Dance Chicago in the only way around is through, choreographed by Joshua Blake Carter with concept and structure by Nan Giordano.

First as a writer, and now as an editor, I spend a lot of time contemplating the flow of a particular piece. I’ve come to the conclusion that nothing kills a story faster than repetition, and that it goes deeper than just repeated words. Repetitive choreography can be a disaster in a story.

Take for example, the following:

“I was hungry.” Michael brushed chocolate and crumbs from his face with his sleeve.

“I told you to wait.” Mother snatched the rest of the cookie from his fist and tossed it into the trash.

“But Mother…” His lip quivered.

Not a bad start for a newer writer, but notice how every paragraph starts with dialogue? Now, read the same example, with one simple alteration–the sentence starts vary between dialogue and action beats:

“I was hungry.” Michael brushed chocolate and crumbs from his face with his sleeve.

Mother snatched the rest of the cookie from his fist and tossed it into the trash. “Sweetheart, I told you to wait.”

“But Mother…” His lip quivered.

Notice some of the things implied here. Mother has a bit of a temper. Her flash, reactionary action of snatching the cookie (involuntary, almost) comes before her more measured dialogue.

His trailing answer and quivering lip hint that Mother may be giving him a stern look. He thinks for a second that he might be able to sweet-talk his mom into another cookie, even though she’s just cut him off at the pass with the one he was eating. But then, he sees her face and realizes another cookie is not happening. After that reflection, the physical reaction comes into play.

If she had said  no cookies before supper before lifting the jar to the top of the fridge, Michael might believe he still has a small glimmer of hope. But the action emphasizes the finality of her words. Not only is she saying he can’t have the cookie, she’s lifted it out of his reach.

A well-written scene is carefully choreographed. It’s of utmost importance to consider when a dialogue will be given from a reactionary standpoint.

Mary rounded the corner, stopping two feet from Luke, who sat lip-locked with a brunette.

“You jerk! How dare you?” She tapped him on the shoulder.

The shoulder tap feels off here. Wouldn’t she want his attention before calling him out? A light tap on the shoulder does nothing to show the fury she must be feeling.

Annie burst into the boutique, Chad at her heels. “We’re having a baby!”

Now, I’m an advocate for using a better action beat than Meredith smiled in this situation. It’s weak, and does nothing to help us SEE what Meredith is really thinking. However, think about the implications of her smiling AFTER she speaks.

Involuntary and natural reactions are spontaneous. They come first. Dialogue takes thought. So, if she gives the dialogue first, it implies there must be a pause before she speaks. Which begs the question–why? Is Meredith not happy about this baby?  But if she smiles first, it feels natural. She is happy. No question.

“Hey, Karen. I was meaning to talk to you about our team party next Saturday. Mark said you were bringing the cupcakes.” Lisa turned to face her.

See the problem with that? One, how would Lisa even know Karen had approached? Two, isn’t it odd for Lisa to speak with her back to Karen? What would that imply about their relationship?

Neely plucked a pink highlighter from her pencil case. “I’m taking good notes today, Brooklyn. That last quiz was a disaster. I made a seventy-two, and that’s even after three hours of studying.”

How often do people really stop what they are doing to talk? Sit back and watch people in a conversation sometime. Dialogue is interspersed in action. It seldom happens that someone delivers their full monologue apart from whatever they are doing. It’s more realistic to say:

“I’m taking good notes today, Brooklyn. That last quiz was a disaster.” Neely plucked a pink highlighter from her pencil case. “I made a seventy-two, and that’s even after three hours of studying.”

It’s amazing what good choreography and dialogue altered between sentence starts, middles, and ends can do for your story.

Happy editing! Best of luck with your revisions.