Medusa’s Hands is the second book in the Goddess to Daughter Series. Available on Amazon, and FREE Feb 10-14 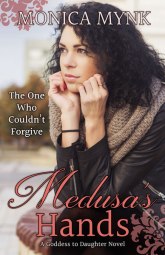 Meet the characters in this short story promo.

MEGAN CARTER dropped her apron on the table and slid into the booth. Money spilled out across the Formica top, and she stuffed it back in the pockets.

Yawning, Megan sorted bills into piles and made stacks with her change. She added the ticket totals: $392.75. Did her eyes deceive her? She hadn’t even counted the bills. Nearly all the cash was hers.

Before she could relish the thought, a receipt caught her eye. Ten-ounce steak, medium rare. No tomatoes or onions on the salad. Loaded baked potato. Familiar scrawl. Fourteen cent tip. Stupid jerk. More than last time.

Zach Allen had demanded new ketchup, all the available sauces, a recooked steak—he complained about anything he could to get her running. His rowdy friends laughed every time. Tears brimmed her eyelids. And Opal made her wait their table. Every single time.

Zach Allen, who’d made her entire world go around in middle school. The boy who’d begged her to be his date to the Snowball Dance—she refused because he’d bullied her best friend. The boy who tried to apologize all through high school.

The boy, now a man, who bad as she hated to admit it, still filled her dreams at night. Which was crazy. He was a total jerk.

She took out a ten, five, and twenty and handed it to Opal. “You can keep the twelve cents.”

Opal glared over her horn-rimmed glasses as she took the money. “Get out of here, girl. See you at five in the morning. Be here on time.”

“Right.” Megan sighed. “Five a.m.” She stuffed the cash inside her purse. “See you, Opal.”

Orange lights reflected in puddles across the parking lot. Megan headed toward her apartment, passing the group of boisterous drunkards gathered around Zach’s Chevy.

“Woo-hoo, boys.” Zach tipped his cap to her. “Heeeeeeere’s Medusa. Thanks for a lot of nothin’, sugar.”

She stopped in her tracks and dug in her purse for fourteen cents. Tossing the coins at his feet, she glared with every ounce of hatred she possessed. “Don’t you have something better to do than roughhouse in the parking lot of the local bar and grille? Get a life.”

Zach kicked the coins at her. “Don’t you have something better to do than work at the local bar and grille? Get a real job.”

“Loser.” She stalked past his truck, leaving the coins in the street.

“See you tomorrow night, sweetheart. Maybe you can get my steak right next time.”

She didn’t have to look to see his lopsided grin, the one frozen in her mind since he’d tried to kiss her at the prom ten years ago.

“Megan!” The high-pitched shriek forced her to turn back anyway. Opal held up an envelope. “Forgot to give you this tonight. Some girl left it for you.”

“Opal. I’ll be here in the morning.” The woman wasn’t going anywhere. Megan huffed and crossed again to the restaurant door. She accepted the envelope and resumed her walk.

“Ooh.” Zach stepped in her path again. “See you got your invite.”

She furrowed her brow. “Invite?”

He palmed her wrist and twisted her into a spin. His breath reeked from alcohol, and his hands felt sticky and gross. “The reunion. Save a dance for me, will ya?”

“No thanks.” She jerked free, rushing forward. Zach followed.

A few feet in front of her, a dark figure leaned against a streetlight pole. When she passed, he emerged. “Hey, Megan. I’ll take you home.”

“I don’t want to hear your excuses. Leave her alone, or find other employment. And get someone sober to take you home.” Geoff tucked an arm around Megan’s shoulder. “I’ll drive you. Where to?”

She drew in a deep breath. “I live down the road. I can walk.”

Zach and company huddled around his truck. Geoff shook his head. “Crazy fools. I’ll talk to him tomorrow when he’s not plastered. He won’t bother you anymore.”

Megan snorted. “Wow. A big promise from the guy who used to bully everyone.”

Geoff pressed the button to cross the street and faced her. “I’ve not been a bully for years. In fact, I’ve been working to make it up to everyone I hurt.” He swallowed. “You’re on the list.”

The muscles in her face loosened, jaw slacking. “It’s been years.”

“You? Help me?” The walking signal appeared, and she strode through the crosswalk. “No offense, but I think I’m beyond help.”

“I am in charge of the adult scholarship fund now. I can send you to any state college you’d like to attend. You’d definitely qualify.”

Laughter choked her. “Me? College?”

He blinked at her. He was serious. Megan clutched her uniform collar. Could she go to college? She fingered her springy natural curls. She had once considered being a hairstylist. “Would it pay for cosmetology school?”

“And no strings attached?”

Geoff extended his hand. “No strings. Can we shake on it?”

“What time is your shift tomorrow? I’ll come by and bring the paperwork.”

“One sounds great.” Geoff took her fingers in his and squeezed. “I’ll meet you at Opal’s at one.”

They reached her apartment, and he stared in the direction they’d come. Even from the short distance, the drunkards’ laughter carried.

“Give me time.” Geoff tossed Zach a small wave. “I’m working on him. You let me know if he bothers you again.”

“I will.” She entered her apartment, and he nodded to her before she closed the door. “Bye, and thanks.”

She dumped her purse’s contents on the kitchen counter, her heart stopping when only change tumbled free. Her money! Where could it be?

No! She sifted through every pocket. Nothing. She hurried to the door, jerking it open. Maybe she’d lost it in the parking lot.

Zach stood on the other side, his finger pointing toward the doorbell.

“What do you want?” She forced herself to breathe.

“Ya dropped something.” Zach pulled the wad of cash from his pocket and offered it to her. He scuffed his boot on the sidewalk. “I’s going to keep it, but… It must stink to live here.”

Her eyes filled, and she snatched it from him. “Not everyone can live in luxury on free property next to Geoff Spencer’s farm.”

“Didn’t mean…” He shoved his hands in his pocket and stood straighter. “It occurred to me you might need your money.” He bowed in dramatic flourish.

“Well, thanks.” She slammed the door.

He caught it in with his palm, pushing it open a crack. “Wait.” Holding the door with his foot, he pulled a hundred-dollar bill from his wallet.

“I don’t want your stupid money. You’re drunk. You won’t even remember giving it to me.”

“Take it.” Zach tossed it into her entry. He spun and stumbled off before she could protest.

“Hey. Zach!” She locked up, and ran after him to his truck.

He fumbled with his door handle.

“Listen. You can’t drive right now. Let me take you home.” She covered her lips with three fingers. Was she crazy? But she had to. Zach would wreck and kill somebody.

She wrenched his keys from him and led him to the passenger seat. He gave her a dopey grin as she fastened his seatbelt.

After deciphering his slurred directions, she drove him to his trailer and called a cab. He snored while she waited.

Under the dim porch light, his shadowed face bore a sweet innocence, reminiscent of the boy who captured her heart years ago. Her fingers, drawn to his face, rubbed the ridges of stubble covering his chin. Would things have been different if she’d given him a chance then?

She pressed her palm against his heart, and he grasped her hand with both of his. Prying herself free, she scooted to the far edge of the truck.

A white envelope with teal print stuck out of the door pocket. She picked it up and extracted the letter. “Oh.” She snorted, glancing at Zach. “A cordial invite. How swanky.”

Remembering Geoff’s offer, she smiled. Maybe she would accept since she had something to boast more than waitressing at the local bar and grille. She’d get a cosmetology degree and open her own shop in a different town.

She stole another glance at Zach. And then, she’d never have to see him again.

Don’t forget to check out the first in the series, Pandora’s Deed, if you haven’t already.

Posted on March 6, 2016, in Uncategorized. Bookmark the permalink. Leave a comment.