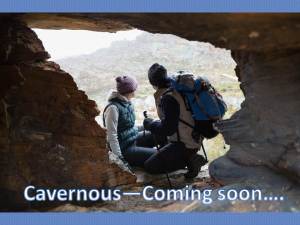 Today, I’ve decided to join in with Jewel Series author Hallee Bridgeman and cohost Alana Terry and participate in Christian Fiction Friday, which is a chance for Christian authors to post short snippets from their works in progress!

I’ve been working on polishing three different manuscripts this summer–Humbled Goddesses, a series of short stories to introduce my romantic suspense series, Pandora’s Deed, the first book in my series, and Cavernous, my YA dystopian. For this snippet, I’ve chosen a pivotal moment in Cavernous, where Callie, the protagonist, faces the end of life as she’s always known it.

Michael backs against the wall next to Dad. “Can we help you?”

The taller man snarls, tugging the waist hem of his uniform coat while the shorter one presses forward with the barrel of his rifle. They resemble Union men in Revolutionary red, like a mismatched reenactment from history class. Strange, and chilling.

He lowers his gun to one side, nodding for the shorter man to advance. “Agent Kevin Wiseman. I’m looking for Callie Noland.”

Me? Why would they be looking for me?

Dad holds unsteady arms in front of him. “I’m Martin, her father. What do you need?”

I jolt. Ethan covers my mouth before I can protest, and my shoulders slump. He’s right. I’ll get us all shot.

Face tightening, Dad lowers his hands while Michael steps forward in full courtroom stance. He releases a shaky breath. “Did her mother send you?”

Michael’s scoff shatters the brief silence that follows Dad’s soft words. “Under whose authority? What organization are you with? Where’s your badge?”

“Under her father’s authority.” Agent Wiseman stands even taller, his chest puffing like a blowfish. “That’s all you need to know. Like I said, Ms. Noland needs to prepare for transport.”

The man accompanying Agent Wiseman lowers his rifle and pulls a folded manila envelope from under his arm. “According to this DNA test, she’s not your daughter.”

Angela, still bustling in the kitchen, drops a full platter of chicken.

Trembling head to toe, I dodge the crumbs scattering across the floor. Of course Dad’s my father. And yet… the driver’s license… Mom’s alias… No, it can’t be true.

“I don’t believe you.” Dad crosses his arms and straightens.

Wiseman hands him a piece of paper, which he scans, his face blanching.

All I can see is a blend of colors—the red flecks in the carpet, the gray steel of the gun, and the gold trim on the agent’s pants—swirling into a twisted mess. It takes a few seconds to realize I’ve doubled over in Ethan’s arms, and my hands grasp his legs for dear life as he tries to help me stand.

Wiseman snatches the paper and tucks it into the envelope, then removes another page. He shoves it in my face. “Your real father has filed for and received custody.”

Dad steps in front of me. “Not possible. When was the hearing?”

“We sent you a notification, and you didn’t bother to show.” Wiseman hands him the document.

Falling against the wall, Dad steadies himself with quivering hands. “I never received a notification.”

Snorting, the other agent turns to me. “Consider yourself fortunate. Provisions have been made for you to attend the Monongahela Military Academy. We’re leaving immediately.”

Ethan’s strong arms loosen their hold of my rubbery ones and his fists clench. The second agent aims his rifle, and Ethan relaxes his posture. “Can she at least have time to process it? Or to say goodbye?”

“I—” A military academy? My gaze darts between Dad’s gaping mouth and Wiseman’s rifle.

“I’ll be waiting by the car.” Wiseman nods to his partner. “Agent Burton will escort you when you’re ready. You have five minutes to gather your things and say your goodbyes, or we’ll have to resort to bigger extremes.”

Chills surge through my entire body. I lick my dry lips, hoping I can find the words to say goodbye. “But most of my things aren’t here.”

He points the rifle out the front door and shoots across the yard. “Five minutes, and no more. Resistance will not be tolerated.”

In a divided America, several secessions lead to the formation of a new nation, the Alliance of American States. Fueled by extremists who solicit members via social media, the Alliance has one weak point: Callie Noland, daughter of extremist leader Adrian Lamb. Can she maintain her faith in God and stand up to the man who calls himself Lord and Master?

The mission of the Cavernous trilogy is to incite a revolution for teen girls to delve into Scripture. Many of today’s society grasp at a meme-driven belief system and draw doctrine from Facebook and Twitter statuses. They need strong characters that write the words of God on their heart and take stands against slight untruths and injustices, especially the youth.

Christian Fiction Friday is a weekly blog hop where authors post snippets from their current Works in Progress. It is hosted by Alana Terry and Hallee Bridgeman.